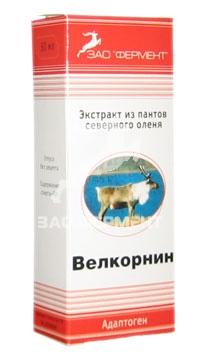 This is the extract from the reindeer antlers which is similar with PANTOCRINE by pharmacological properties but with a more profound effect of action due to the maximum concentration of the complex of biologically active substances (in 3.5 times). The latter can be explained by inhabitation of the animals at the yearlong natural ranges under extreme conditions of the Far North and by a more effective method of extraction of the extractive substances from antlers.

Its composition contains over 80 biologically active substances, which are diversified by their chemical nature: peptides, amino acids, lipids, carbohydrates, hormones, nucleotides and mineral substances (see the Appendix). The unique richness and complexity of the VELCORNINE composition define its spacious physiological effect on human body.

The preparation is created by nature itself from the raw animal material. It is different from the plant extracts, which contain the poisonous alkaloids, as well as from the pure chemotherapeutic compounds. The latter often provoke the patients' allergic reactions, anaphylactic shock, pulmonary edema and other adverse effects.

The clinical trial of VELCORNINE has been performed at the Russian State University, the All-Russian MYASTHENIC Center of the Research Institute of PATHONOMY and PATHOPHYSIOLOGY of the Academy of medical Sciences of Russia, the Moscow Medical Academy after the name of I.SECHENOV, the Polar Medicine Laboratory and other leading research institutes of Russia and Ukraine.

Being a complex ORGANO-PREPARATION, VELCORNINE simultaneously combines therapeutic and prophylactic qualities. In spite of the wide spectrum of pharmacological activities of the preparation, the following basic lines of its human exposure can be highlighted out:

VELCORNINE is an effective medication to increase the physical efficiency and stimulate the HUMORAL immunity of sportsmen within the preparatory periods of training; and it is recommended by the sports medicine as an invigorant, a restorative, a strengthening agent, a tonic.

The stimulating effect of VELCORNINE has been tested on sportsmen during the intensive training. The research showed that the application of VELCORNINE enhanced the sportsmen's performance.

The stimulating effect of VELCORNINE on the sportsmen's organism is defined by the high-turnover rate, first of all, by a 55% increase in the CREATINE phosphate (CF) concentration in muscles which provides for preservation of a high level of ATP (adenosine TRIPHOSPHATE). The ATP RESYNTHESIS energy source is liver glycogen. The mechanism of the VELCORNINE effect on the glycogen catabolism acts through the nervous system, to be more exact – through the MYONEURAL junction. The mediator of the nervous impulses of the vegetative nervous system is acetylcholine contained in the extract from antlers. Acetylcholine, in its turn, is the adrenaline secretion stimulator, which accelerates the glycogen breakdown.

VELCORNINE increases the potential aerobic oxidation of the RESYNTHESIS of high-energy compounds. This provides for a longer retention of conditions for the optimal body action at the intensive muscle work and the biochemical restitution processes at the time of relaxation.

A very important property of VELCORNINE is its impact on toning up the general physiological tonus of the sick human body. The physiological body tonus is defined by the functional activity and harmonic interaction between various body textures, organs and systems. The course of metabolism, the state of the action of the cardiovascular apparatus, the GI (gastrointestinal) tract and, especially, a correlative role of the nervous system – are the key factors that define the tonus of the body, the degree of its resistance to the various deleterious actions. Considering the active impact of the antler extracts on the above mentioned systems, their high tonic ability and therapeutic properties can easily be explained.

Against the background of taking VELCORNINE, in the patients with the ASTHENIC syndrome in 2-3 days of treatment, there is some improvement in the general state, mood and performance capability. Later on, the positive the "yes" response grows which is expressed in reduction in headaches and vertigos, stabilization of arterial tension, allaying of irritability and improvement in sleep.

If the patients with the severe ASTHENONEUROTIC states are treated with VELCORNINE, the following can be noted:

The clinical trial results point to the positive effect of VELCORNINE on the functional state of the vegetative nervous system.

At the present time, the preparation is recommended by the Ministry of Health of Russia to use as a medication for the treatment of the functional or dynamic diseases of the nervous system of the ASTHENIC type under pressure of neuroses, as well as at the structural or organic diseases of central nervous system.

VELCORNINE is applied for improvement in the body tonus after the severe DEFATIGATION and the physical or mental strain.

The reindeer antler extract produces a stable restorative effect in elderly people (60-74 years old), with a moderate expression of cerebral atherosclerosis. After taking the medication, most of the patients noted a significant improvement in general tonus, the normalization of sleep, the reduction or disappearance of headaches and vertigos, a significant reduction in irritability, stability in mood… Some of the patients noted the disappearance of pains in the region of the heart and the reduction in DYSPNEA; in the case of BRADYCARDIA the heart rhythm was normalized.

VELCORNINE has an IMMUNOACTIVE effect and can be recommended for the preventive and medical treatment of diseases of immunity. According to the data by the scientists of the polar medicine laboratories under the conditions of the Norilsk industrial district, a great popularity of the secondary IMMUNODEFICIENCIES can be seen among the imported population, as a result of which the share of the respiratory tract diseases among all diseases is almost 54%. Under the action of VELCORNINE, an earlier JUGULATION of the intoxication symptoms, a more intensive sputum discharge and the normalization of the inflammatory process activity indices can be observed. The positive dynamics of the indices of the T- and B-cellular components of immune system is also noted. The experimental studies were conducted as for the impact of VELCORNINE on the immune system at the medical treatment of the Chernobyl accident liquidation participants. In the course of the 21-day treatment, no side effects were noted.

The patients noted the improvement in well-being, performance capability and the change in the immune status. The number of leucocytes and lymphocytes is increased die to the population of the T-lymphocytes. The increase in the number of IMMUNOGLOBULINS A was identified in the HUMORAL link.

VELCORNINE has a pronounced IMMUNOACTIVE effect and can be recommended for the preventive and medical treatment of IMMUNODEFICIENCIES, including in those who were irradiated.

It is established that VELCORNINE changes essentially the course of stress and improves the general (nonspecific) body resistance. This gives the grounds to include it in the group of ADAPTOGENS along with the well-known ginseng, ELEUTEROCOCCUS (Siberian Ginseng) and PANTOCRINE.

3. Impact on the sexual function

The research has shown that the use of VELOKORNINE by those men who suffer from sexual weakness secondary to the general asthenia is accompanied by the improvement in the overall health and sexual activity (the erection is restored and the sexual act is prolonged).

VELCORNINE is successfully used at impotency by the two big groups of patients: the young men at sexual neurosis and the old men with PROSTATIC hypertrophy.

Apart from the above pharmacological properties of VELCORNINE, it also has the other multiple effects or actions on human body:

Thus, taking into account the availability of the whole complex of the biologically active substances in VELCORNINE, its PD (PHARMACODYNAMICS) is quite diversified. It has a pronounced impact on the basic physiological systems and makes the complicated functional recombination in the body. This is due to its beneficial therapeutic effect or action on various diseases. However, the key point of application of VELCORNINE is the vegetative nervous system, through the neuron.

Being an active stimulator, VELCORNINE improves the SANOGENETIC human performance, eliminates the state of pre-existing disease and prevents its transformation into the expressed disease.

In that is a huge (though still unused by the modern medicine) positive meaning of VELCORNINE as a medication that can easily be applied for the preventive purposes.

It should especially be important to emphasize the advisability of application of VELCORNINE as the disease prevention by the people of our time. During the transition to the market economy both young and old people are used to fall into depression resulted in remodeling the body reactivity and under certain conditions it may serve as a cause of progress of the state of the latent period pre-existing disease and then – also of the expressed or severe stages of corresponding diseases.

VELCORNINE removes the human emotional and physical overwork. It was not for nothing that for five centuries the peoples of Tibet have used the antlers as a preventive medication toning up the body. Besides, for 100 grams of antlers the Koreans pay up to 300 US dollars.

Taking into account the complex chemical composition of the medication and its high therapeutic effect, the Ministry of Health of the Russian Federation issued the order on its application and approved the VELCORNINE application data sheet in 1993.